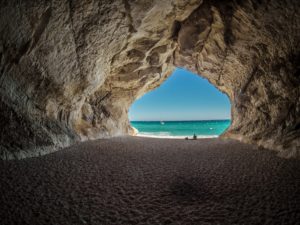 In search of the most beautiful places on Earth, we come across a small Italian island in the Mediterranean Sea. Sardinia is one of the most picturesque places in the world – in fact, every photo taken here is suitable for a postcard. An emerald-colored island, located a bit off the beaten track in Italy, formerly often overlooked, now a more and more popular holiday destination every year. A holiday in Sardinia has so much to offer! Beautiful coast famous for its beautiful coves, the city of Alghero full of history and art – called little Barcelona, ​​the capital of the island of Cagliari, where you can see flamingos, drink good wine or walk among beautiful streets, or the Gulf of Orosei famous for its bays and mountains that descend here to the sea. As in all of Italy, also in Sardinia, we will drink delicious wine from our home vineyards. We can find here a variety of cuisine that even the most demanding guests will love. In addition to pasta and pizza, this kitchen offers seafood, 100 types of bread or fresh fruit. However, it is known for its peasant menu, the best dishes offered are those of meat: lamb, mutton, pork or beef. Plus, of course, goat cheese and bread. What’s worth seeing in Sardinia?

Porto Cervo – a paradise for the rich

Sardinia is one of the favorite places of the rich. Beautiful, luxurious hotels ( Sardinia hotels ), sunny weather and resorts filled with yachts of the richest in the world – this is the sight of tourists who spend their holidays in Sardinia. Walking along the sandy beaches, we can easily meet sports stars, actors or businessmen from all over the globe. The symbol of the luxury of this place is the town of Porto Cervo. It is hard to believe that until recently it was the poorest place on the whole island. The fishermen themselves, selling their plots, were surprised that anyone wanted to invest in this region. Today Porto Cervo is a symbol of luxury, a paradise for the rich who are willing to buy their holiday villas and apartments in this place. All thatPorto Cervo owes to Karim Aga Khan. An Arab prince, a British millionaire and one of the richest in the world, commissioned the creation of an exclusive space that would combine the essence of Mediterranean ease and the lavish life of the rich, creating a paradise reserved only for the chosen ones.

The Emerald Coast is a beautiful place where we can find breathtaking white sand beaches located by the blue sea. When planning a vacation in Sardinia, it is worth booking one day to visit this town. Of course, the main attraction of this place are of course the beaches. The most famous is Cala Granu, located less than a kilometer from the resort. Its small length makes it unique – it is just over 100 meters long. The archipelago of La Maddalena, famous for its pink sand, is nearby.

The place is not only beaches. The northern part of the island has many traces of ancient times and remains of ancient civilizations. One of such monuments is the nuraghes – round, stone tombs, a remnant of the Nuor civilization. The most monumental of them – Tombe dei giganti – have more than 2 meters high skeletons!

The capital of Sardinia

The largest city and also the capital of the entire island is the city of Cagliari. These are specific places that differ from the rest of the island. Many people resemble Rome with its climate and appearance. Like the capital of the entire medieval world, Cagliari stretches across the slopes of seven hills that descend to the Gulf of Angels – Golfo degli Angeli. Unlike Rome, life in Cagliari is much slower. It is the epitome of the lazy lifestyle of the inhabitants of all of Sardinia and is immediately full of places where you can party in the evening, drink coffee during the day or places of beautiful architecture. One of such places is Bastione di San Remy – a building in the Castello district from the 19th century on the city walls. While on vacation in Sardinia (Sardinia guide), this place is a must see because of the wonderful view from the terraces. You can see the entire landscape – the port, town resorts and picturesque beaches. While walking through the beautiful streets of Cagliari’s Old Town, it is also worth paying attention to other interesting architectural buildings, such as the Elephant Tower (Torre dell’Elefante). As in the capitals of other Italian regions, also in Cagliari, the Old Town is not only monuments, but also shopping and food. In Cagliari, on the beautiful colorful streets, we have plenty of shops of the world’s largest brands, as well as many restaurants serving regional Mediterranean dishes. When choosing a holiday in Sardinia, however, we do not have to limit ourselves to typical Italian cuisine consisting of pizza and pasta. The menu offered in Sardinia is much more extensive, and you can find meat, cheese and seafood. This is great news for all those who want to try new dishes while traveling – there is no shortage of such in Sardinia. Like beautiful places, there are many of them.