Polish companies are increasingly looking for employees from the East 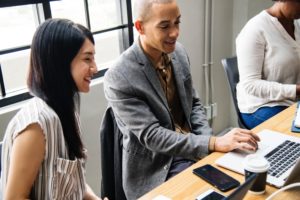 It is not difficult to notice that workers from the Eastare an increasingly common phenomenon on the Polish labor market. The number of domestic entrepreneurs who willingly decide to entrust work to Ukrainians and Belarusians is growing rapidly. All because of the shortage of Polish contractors. The best specialists went to England and Germany in search of better working conditions and higher pay. Polish employers had no choice – they were forced to employ foreigners from Eastern Europe. However, they quickly realized that they were trustworthy people who took their activities extremely seriously. Their characteristic features are commitment and great motivation to maintain employment. Many newcomers from the East aspire to stay in Poland permanently. Some people are terrified by this situation of the Polish labor market, others are fascinated. What is certain is that employees from the East are people worth investing in.

Employees from Ukraine and Belarus in Poland – Practical information

According to the latest information, there are over 2 million citizens of Eastern European countries currently employed in Poland. It is also worth knowing that the given number is constantly increasing. The largest part of them are citizens of Ukraine, followed by Belarusians and immigrants from Moldova. Job vacancies in Poland are systematically occupied by our eastern neighbors. It is also not difficult to observe that domestic administrative bodies as well as offices and institutions adapt to this situation very quickly. The result of this situation is the creation of new non-wage programs for foreigners, as well as the growing openness of universities to students of a large number of Polish borders. There are many amenities for foreigners. The largest of these include lower tuition fees and preferential conditions for reconciling study with paid work.

Workers from the East they associate with each other via social media. The Internet allows them to eliminate the factor responsible for the feeling of being lonely after leaving their homeland. Thanks to this, the assimilation process is faster and more efficient. Moreover, on social networks one can also observe the formation of specific groups of Poles who wish to support Ukrainians and Belarusians working in Poland. Such people are happy to provide support in the field of labor law, filling out documents, or in such mundane matters as showing around the city. Many people see the undeniable potential of employing foreigners in Poland and try to make the process of adjusting to a new place as easy as possible for them. Interestingly, newcomers from across the eastern border very quickly begin to feel at home in our country.

Employees from the East and the Polish labor market

Ukrainians, Moldovans and Belarusians, and even workers from Asia , most often find employment in production halls, car repair shops and construction sites. They are slightly less common in industries such as renovation services, hotel industry and broadly understood trade. Most foreigners find work in large corporations, but there are also many in medium and small economic activities. It is also worth knowing that they can be easily found in the structures of enterprises of almost any profile. It is also interesting that Poles have a rather positive attitude towards workers from the East. There are not many reports of their persecution for reasons of different nationality or cultural differences. Ukrainians are famous for quickly making new acquaintances and friendships. The process of their assimilation usually takes no more than a few months. It is also interesting that the majority of foreigners employed in Poland openly say that they would like to settle permanently in our country. The consequence of these desires is that whole families from Ukraine are moving to us more and more often.

All the above-mentioned issues make employees from the East appreciate the conditions offered to them by the Polish employment market. This is reflected in their involvement in the implementation of the projects entrusted to them and in the precision with which they perform their duties. Their presence is also of considerable importance for the situation of the Polish economy. It may seem interesting that the current number of jobs in Poland is sufficient both for visitors from abroad and its citizens. Some people accuse the Ukrainians of taking jobs from Poles. However, these are accusations that are not reflected in any reality. The truth is that there is enough work in our country for all those who are interested in taking it. Workers from the Eastare included in this group and this is why they are such a frequent phenomenon in the structures of Polish enterprises. In the process of their recruitment, consultation with employees of the employment agency may be helpful.