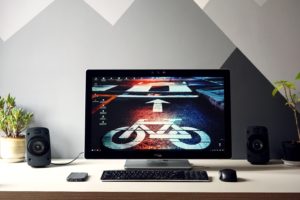 How to define a computer for a player? Many people try to answer this question. It is not that if someone has a computer for the player, you cannot do other things on it, such as work. Well, that’s the key to the answer. The normal computer cannot be the player’s computer, but the player’s computer can be used in the usual way. It’s like saying in mathematics that a square is a rectangle, but a rectangle is not a square. So what is so special about this model dedicated to gaming? First of all, much better parameters that result in its better, faster and more efficient work, not only during relaxing entertainment, but also during work. Many people turn to gaming computers in their daily careers, precisely because of this performance fame. Such a computer has no major problem with performing several complex operations at once, which is why it is a great tool also in the work of graphic designers and architects, as well as all kinds of designers. However, returning to the question posed, a computer for gamers is almost always associated with a strong processor and a great graphics card that allows even the most dynamic images to be displayed smoothly. But that’s not all. The components themselves will not create a good stationary unit, so that everything is as it should be, it must be properly configured and matched with each other, so that no operation is mutually exclusive with another. This knowledge is known to excellent producers of this type of equipment and from year to year, more and more meet the requirements of a wide range of specific customers with high requirements, such as players.

The heart of the computer: motherboard, processor and graphics card.

The motherboard is one of the most important elements in any computer, not only in gaming computers. However, the one installed in models for players is characterized by a different sound system, as well as a more advanced network card, which allows for better parameters. It is the mentioned network card that is responsible for sending packet data to the world, thanks to which playing online on such computers is not a major problem. In the case of the motherboard, players also pay a lot of attention to the number of inputs, which allow the potential to expand the equipment over time. It is good if such a motherboard allows you to connect one more graphics card and the necessary equipment such as peripherals, but also all kinds of joysticks or steering wheels. The motherboard is not everything, however, In order for the player’s computer to function efficiently, an appropriate processor is also required, which should preferably be at a similar technological level with the graphics card used. The biggest mistake of people who assemble computers for players themselves is choosing a too strong graphics card for the processor, which in effect only overpays, because a weaker processor is not able to handle a stronger graphics card using it to the maximum.

Gaming desktops they are characterized by the generation of a large amount of heat during operation, therefore they require good cooling, which effectively reduces the temperature of components that work at the highest speed. If the computer for gamers does not have adequate cooling, it can overheat the components and result in the computer turning off during the game, which is an extremely irritating thing. In addition, doing so may damage your computer’s component. The power supply is also a very important element that must not be treated neglectively. It must be selected individually for a given set, so that it is able to stably power the entire computer. Choosing a power supply that is too weak may result in its frequent failures and costly replacements. Therefore, it is better to invest in something good from the beginning.

The market for gaming equipment is full of special mice with additional buttons that enable more efficient gaming on the computer, as well as keyboards enriched with backlights and additional functions. Both of these elements are usually freely programmed by the software attached to them, so they can be adapted to your needs. Fans of games that use pads can buy a universal version, so they will not have to play their favorite games, only on consoles. Headphones for players are also an element that is highly valued in this environment. They allow you to focus on the game and feel the story, without being distracted by sounds coming from outside. When buying accessories, however, remember that cheap peripherals will only come with gaming names,